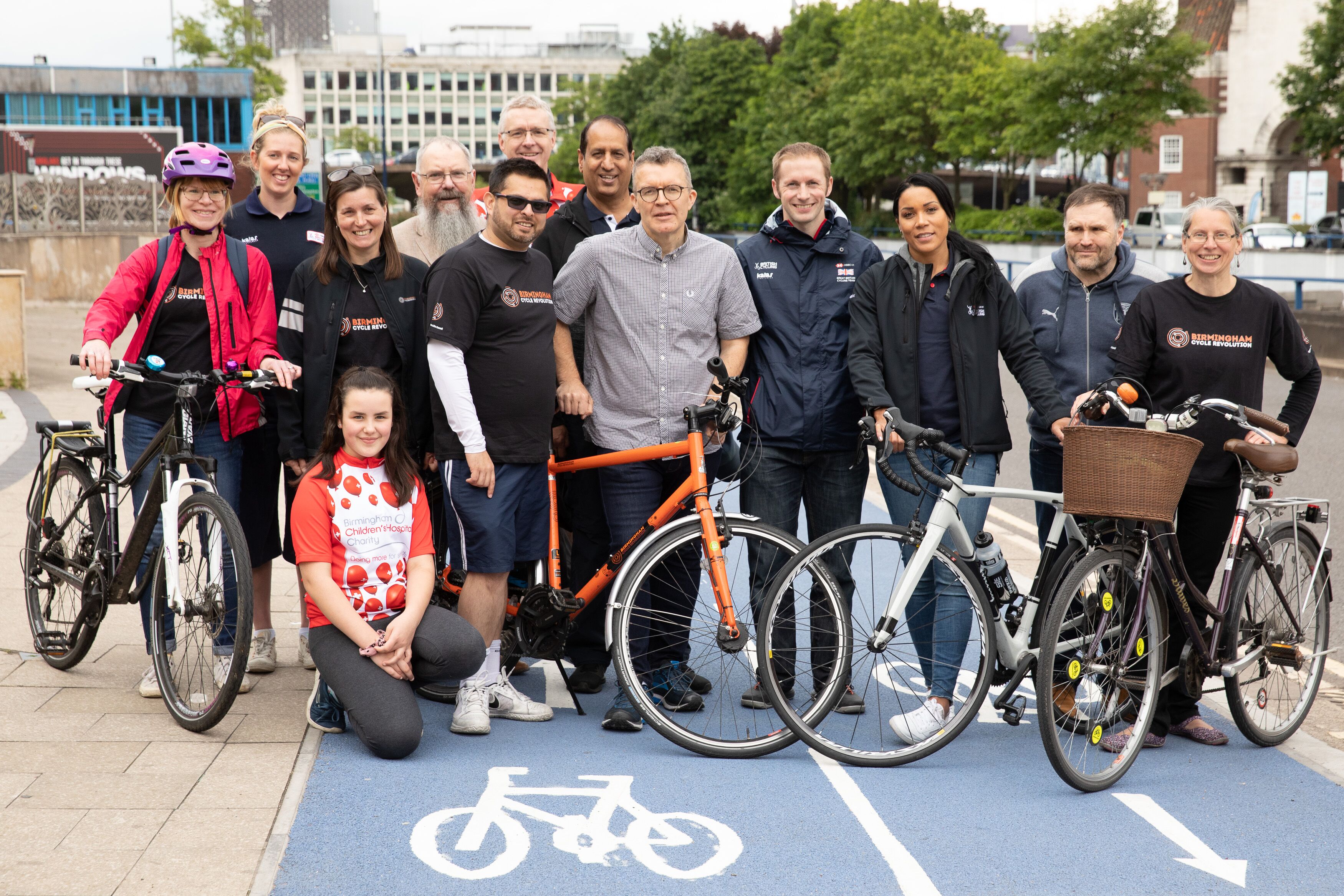 The latest segregated cycle route delivered as part of the Birmingham Cycle Revolution (BCR) programme has been completed and is now open for use.

The new A38 route from Selly Oak offers a 4km two-way segregated cycle route for people cycling into the city centre from the south west of the city. The route is highly visible with a blue aggregate surface to make it stand out to all road users.

This route has been funded through a combination of the Department for Transport’s Cycle City Ambition Grant and the Greater Birmingham and Solihull Local Enterprise Partnership’s Local Growth Fund.

“The completion of the A38 cycle route is a key milestone in the development of cycle infrastructure in Birmingham. It provides the second of two segregated cycle routes into the city centre using road space that has been reallocated from motor vehicles, and is suitable for use by commuters, leisure cyclists and families alike.

“Cycling is a great way to get to work or school, go to the shops, visit friends or for leisure trips – we’d encourage everyone to consider getting out of the car and giving one of the many new or improved cycle routes across the city a go.”

“Having recently ridden the 100 mile Vélo Birmingham and Midlands, with 17,000 other cyclists, I firmly believe that cycling can have a huge impact on people’s lives.

"There is a great appetite for cycling in the region and good quality cycle routes, not only provides people with a greener more affordable way to travel but, creates jobs in the recreation and fitness industries.

"More people cycling, more often, also has a positive impact on the environment, reducing congestion, improving public health and ultimately improving the quality of life for people who live and work in the region.”

This new route is part of a much bigger programme of new and upgraded cycle infrastructure delivered across the city over the last 5 years as part of the Birmingham Cycle Revolution (BCR) programme. This includes over 50km of canal towpaths improved with an all-weather cycling surface, over 25km of new or upgraded green routes through parks and open spaces and another largely segregated route along the A34 into the city centre from Heathfield Road, Birchfield.

The BCR programme has also seen cycle parking improved in the city centre and other local centres, Top Cycle Location grants provided to businesses and schools to improve facilities that encourage cycling, 7,000 free orange Big Birmingham Bikes given away to residents in the most deprived parts of the city, and 20mph speed limit areas introduced to improve safety for cycling.

An official opening of the A34 and A38 cycle routes took place on Sunday 9 June as part of HSBC UK and British Cycling’s Let’s Ride Birmingham cycling festival. Social rides took place along both routes to bring people in to the Let’s Ride event and the BCR team was represented at an information stand in the Festival Zone at Aston University.

“What the Birmingham Cycle Revolution programme has managed to achieve over the last five years is fantastic. Now, with the new and upgraded infrastructure in place, people looking to travel by bike into the city centre for work and leisure have a safe and connected way to do so

“We know encouraging more of us to travel by bike or on foot is not only good for keeping fit and for your mental wellbeing, but also brings wider environmental and economic benefits – which is exactly why we want to make cycling and walking a natural choice for everyday journeys.”

The opening of the A34 and A38 routes coincides with the start of Bike Week which runs from 8 to 16 June.  The city council has teamed up with Love to Ride to offer people some amazing prizes throughout July, including bikes, holidays, vouchers and much more. People are encouraged to register at www.lovetoride.net/birmingham and record their cycle trips for a chance to win.

A series of further events and activities to promote cycle infrastructure delivered as part of the Birmingham Cycle Revolution programme is planned for the summer. For more information visit: https://www.birmingham.gov.uk/cycling.