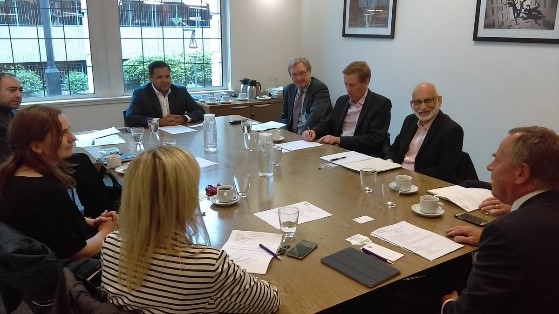 On the 4 June, Rajesh Agrawal, the Deputy Mayor of London, visited Birmingham to meet with key business and council leaders to discuss how our two great cities can share opportunities and build on best business practice to drive economic growth.

The Deputy Mayor of London is visiting five cities, across the country, over the next few months – Birmingham being the first – to let business leaders know that London is open for business.

During his visit to Birmingham, hosted by the Greater Birmingham and Solihull Local Economic Partnership (GBSLEP), the Deputy Mayor of London attended an enterprise round table, took a tour of two prominent businesses spaces – Alpha Tower and Innovation Birmingham Campus, was given a tour of key city developments and was a special guest at a business leader meeting at Baskerville House.

The Deputy Mayor of London led a discussion about the current business trends in both Birmingham and London, and highlighted their similarities. It became apparent that in both cities, leadership and management capabilities, access to talent across a range of sectors, access to finance and markets, and making efficiencies were the top five things that needed to be addressed to enable businesses to grow.

He went on to talk about the London Mayor, Sadiq Khan’s, International Business Programme and how, as part of that Programme, potential high growth entrepreneurs receive mentoring from experienced entrepreneurs, business experts and advisers, and receive information on trade missions to widen their opportunities to growth.

He commended Birmingham for investing in the development of emerging businesses and technology sectors such as Life Sciences and FinTech.

For the second leg of his visit, the Deputy Mayor of London was taken on a tour of Innovation Birmingham. Tim Pile, Chair of GBSLEP and Cliff Dennent, Head of Development at Innovation Birmingham, showed the Mayor how incubator programmes were working to help regional businesses produce innovative products and services.

Gymshark, a Midlands based business with a turnover of in excess of £100 million, was used as an example of how established businesses are reinvesting in research and design in the sports and leisure sector and supporting the growth of start-ups. Gymshark’s incubation programme is supporting Energym, a smart-tech engineering firm, that develops patented innovations to unlock human power as a renewable source of clean electrical-energy.

The Deputy Mayor of London also met with employees from Evari Business Insurance and Story Comms at Alpha Tower.

Envari Business Insurance is a business based in Perth, Australia, that chose to open an office here because of the competitive rates and regional business need for their services.

Story Comms, a PR company, not only manages the PR for the Midlands Engine Investment Fund but also employs a GBSLEP Board Director for Young People.

The Deputy Mayor of London was pleased to see an eco-system of business support and saw these connections between business, investment and the GBSLEP as a real benefit to the region. The Deputy Mayor of London then took a tour of Centenary Square and was briefed by Katie Trout, Director of GBSLEP, about the important role GBSLEP played in the development of the Enterprise Zone including, Centenary Square, Paradise, the metro link extension and neighbouring Symphony Hall.

During the meeting, leaders discussed the current political challenges faced by both cities, and a range of business topics including, enterprise and small business support, innovation and technology, the creative sector and business funding opportunities.

“London and Birmingham are not just connected physically via Grand Union Canal but also share a history of entrepreneurship and innovation.”

“It was an honour to host, and demonstrate to, the Deputy Lord Mayor how the Greater Birmingham and Solihull Local Enterprise Partnership is committed to working collaboratively with others, to drive inclusive business and economic growth.”